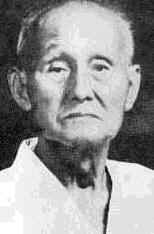 In June 1892, Hironori Ohtsuka was born in in Shimodate City, Japan. He was first introduced to Jiujitsu by his Great Uncle  Chojiro Ebashi, this led to his obsession with Martial Arts. Ohtsuka started school in 1897, where he studied Shindo Yoshin Ryu Jujitsu. He was instructed by the 3rd Grand Master of this style of Jiujitsu, Shinzaburo Nakayama Sensei. Graceful movement was central to his learning, this later heavily influenced his own style.

Between 1910 and 1917 Hironori Ohtsuka commenced Waseda University education, continuing his study of Shindo Yoshin Ryu Jujitsu. In addition, he also began to study other styles of Jiujitsu focusing on their “positive qualities”. He examined techniques from most Martial Arts while he stayed at University. He had developed and improved techniques from other Arts and combined them with advanced techniques. He also learnt of the body’s vital points for both healing and striking, also learning the art of Bone Setting.

Ohtsuka met Morihei Ueshiba Sensei, the founder of Aikido, after joining Kawasaki Bank in 1917. Two years later he had decided to become a full-time martial artist. After opposition from family he delayed his ambition but continued his studies in Jiujitsu. In 1920, Hironori Ohtsuka was awarded the highest degree of Shindo Yoshin Ryu Jujitsu. Allowing him to succeed his Masters position as the fourth Grand Master.

Ohtsuka encountered Karate for the first time 1922 when Gichin Funakoshi was invited to Tokyo’s sports festival. Ohtsuka was impressed with this style of Martial Arts and visited Funakoshi on several occasions during his stay. Funakoshi agreed to teach Ohtsuka his knowledge of Okinawan Karate. Ohtsuka was a registered member of the Japan Martial Arts Federation by 1929. Ohtsuka believed that a sense of Budo was missing from this style as it mainly concentrated on kata. He decided to leave Funakoshi Sensei to develop his own style.

Wado was born and 1934 was a significant year for Ohtsuka and his individual style. Wado-ryu became a recognised style where it continued to develop and was officially registered in 1938. By 1944 Ohtsuka Sensei was appointed Japans Chief Karate instructor.

Wado-ryu remained on the small islands of Japan until the 1960’s. In 1963, 3 martial artists left Japan for Europe and America. The result; was that Wado-ryu became known worldwide. Suzuki Sensei trained regularly with Ohtsuka Sensei and was among the three to bring Wado-ryu to the Uk upon visiting. In 1965, he returned to England, setting up the European headquarters. Suzuki feared that it would be difficult to teach Karate to Westerners as they lacked flexibility due to sitting on chairs instead of the floor, however, this was incorrect.

It is obvious that Wado-ryu has been heavily influenced by other martial artists and styles over time. Included in these styles were Jiujitsu, with its fluid techniques and Funakoshi’s Okinawan Karate with it’s sense of Budo. It is a style that is continued to be practiced today in the UK and also influences newer styles.