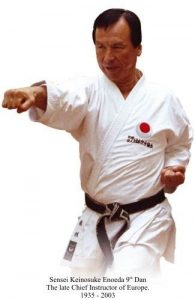 Born on July 4th, 1935, in Kyushu, South Japan, Keinosuke Enoeda was widely known as ‘Tora’ – or, the Tiger. Gaining this nickname, through his reputation and skill as a competitive and extremely successful Karateka. It is not surprising that Enoeda Sensei was so highly revered by his fellow martial artists.

Sensei first started out as a martial artist at the age of seven, when he took up Judo, alongside other massively popular activities in Japan at the time; Kendo, and baseball. He proved to be very skilled, and the art came naturally to him, allowing him to achieve the grade of Nidan at the age of just sixteen, laying the foundations for his future life in the martial art world. Not long after achieving this grade, however, Enoeda Sensei found himself at a Karate demonstration, held at Takushoku University, and showcasing two of the main instructors of that group – Senseis Okazaki and Irea. He found himself to be inspired by what he saw that day, and upon enrolling on a degree in Economics, he joined the group, and began to train in Shotokan Karate.

After just 2 years of tuition from instructors such as Okazaki and Irea, and even Sensei Gichin Funakoshi himself, Enoeda was awarded with his Shodan, the first of the eight dan grades he would achieve over his lifetime. A further 2 years saw him take on the role of Captain for the competition team associated with the university, which allowed him to enter a large number of competitions for the university, in particular within the kumite division of the JKA All-Japan Championships. With each year of entry, he saw evermore successful results, from 3rd in 1961, to 2nd in 1962, and he won the kumite title in 1963, the period in which he had earned his nickname of ‘Tora’.

Following his graduation from the University, wherein he completed his degree, he enrolled in the JKA’s instructor’s programme, with the aim of gaining a teaching licence for Shotokan Karate, which would allow him to help spread the knowledge and prevalence of the system. He studied this course under the instruction and guidance of Sensei M. Nakayama, and Sensei H. Nishiyama, and after three years, he was permitted to begin his career teaching the art; Keinosuke Enoeda was now a Sensei.

Not long after his completion of this course, Sensei found that his reputation from the many competitions he successfully completed, and his senior’s high regard for him, was to lead to him being specially selected by Master Nakayama to travel with him, first to Indonesia, to teach the presidential bodyguards, the police, and members of the military, for use in close combat and to assist their ability to handle and dispel violent situations quickly. His love of this was then combined with the respect of senior ranking members in the JKA, which saw him then moving on to travel all over the globe, to places such as South Africa and Hawaii, to help the JKA spread ‘true’ knowledge of their system, aiming to prevent mimicry and watering down of the style through links to the Japanese-based Honbu Dojo.

April 20th 1965 saw Sensei’s move to Percy Street, in Liverpool, England, being permanent. Venturing to the United Kingdom with Sensei Hirokazu Kanazawa, a good friend of his, and despite earlier hesitations and worried about the huge changes he inevitably faced, he fell in love with the British culture, and took up residency in the city’s centre, from where he began teaching classes, full time, at the Red Triangle Dojo, alongside his role as the Chief Instructor for the Karate Union of Great Britain. Notable alumni of this Dojo includes both Terry O’Neill and Andy Sherry, well known in the martial arts and competitive worlds.

Sensei could be found every day at nearby Sefton Park, training with a small handful of his students, from 7.00 am, so he could keep his own personal training going, something he viewed as being extremely important, given that he had such an influential role over what the clubs under the KUGB’s umbrella, which quite clearly paid off. His time as Chief Instructor saw one of the most successful competitive groups under the recognition of the JKA, to date, with members such as Frank Brennan and Bob Poynton.

His role as Chief Instructor, and reputation for incredible fighting skill also attracted interest from the cinematic entertainment industry, seeing him hired to teach a large number of famous actors, working on some very large films, such as Sean Connery, whom he trained during his time in the role of James Bond, an extremely high profile British film franchise.

Balanced between these jobs and his regular training and teaching, Sensei also wrote a number of textbooks for Shotokan Karate, publishing titles such as Karate: Defence and Attack, and Shotokan: Advanced Kata, plus many more. These were paired with various demonstration and instructional videos, providing an in-depth insight into his style and skill when training in Shotokan Karate throughout his (later) life. 1973 saw him take part in filming a live demonstration for the BBC, appearing on the programme Open Door, which became the first British TV programme dedicated solely to karate and its surrounding components. This saw Sensei showing his skills in Kihon, Kata, and Kumite, alongside some of his students, such as Dave Hazard, who demonstrated the breaking of Japanese hardwood boards.             Sensei married his wife Reiko in 1969, following which he settled in Kinston, Surrey, to raise his 2 children, Daisuke and Maya. His final years of teaching were carried out at the Martial Street Baths, in London. Sensei Keinosuke Enoeda achieved 8th Dan before his death on March 29th 2003, leaving his legacy of a very high standard of Karate within the KUGB that he left behind. Sensei was quite quickly awarded, posthumously, the grade of 9th Dan, by the JKA, after his death, serving as an honour, to commemorate his life and his service to the karate world; not just in Japan or the UK, but internationally.