Back in the early 80’s Keith Bell, 4th Dan in Wado Ryu and training in Shotokan under Sensei Kanazawa, decided to establish a system that incorporated the best from both styles. This new founded style became “Anshin Ryu” (translates as “Peace of Mind” or “Heart and Mind” depending on the kanji translation). The content of the style is much the same as Sensei Bell’s training in the Wado Ryu system, except that the stances became lower towards the Shotokan style, but not as deep. This had the effect of making the style look more powerful like Shotokan, but still retaining the speed of the Wado system. The kata were split, the basic still being Pinan from Wado with some advance kata, such as Kushanku and Chinto, up to and including first Dan, but then the system changes into the Shotokan advanced kata, such as Unsu and Nijushiho etc. 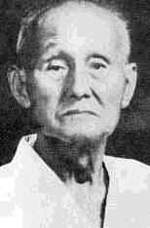 Over the years from the 80’s Sensei Bell established Sentenashi Karate Kosai were clubs covered the North East area, from Barnard Castle, Hurworth, Sedgefield, Newton Aycliffe and Catterick Garrison. The main Honbu Dojo was in Darlington. This was where the Kodokan Sensei trained twice a week, in addition to twice a week at the Newton Aycliffe dojo.

Then in 1992 Keith Bell decided to retire from karate, his interest lie in other directions. At this time Sentenashi disbanded, the Dan grades deciding to go their own way. Some decided to go back to the Wado system, others learning a completely new system, such as Isshin-Ryu, and a few remained with the Anshin-Ryu system.

After leaving Sentenashi, it was on 31st March in 1992 that Sensei Fred Bateman founded Kazoku Karate, along with Sensei Chris Bateman and Sensei Stuart Bateman. The Honbu dojo was set up in St Anne’s Church Hall, Welbeck Ave, Darlington; and still remains there to this day. The school is affiliated to United Kingdom All Styles Karate Organisation (UKASKO), and associated Karate Governing Body. All three of the Sensei (Plural), Fred, Chris and Stuart all started to train under a well-known Shotokan Sensei over in Stockport, by the name of Terry Mathur (5th Dan). Sensei Mathur is no longer with us today and he is sadly missed. Much of their advanced Shotokan knowledge of the system’s Kata and Bunkai (application) comes from their training with Sensei Mathur. He was also UKASKO’s English Kata Squad coach. All three of the Kodokan Sensei competed for the English squad, and winning trophies and medals during their time with Sensei Mathur as their coach.

Between 1992 to 1998, the Anshin Ryu Karate under these Sensei expanded, not only by way of introducing new techniques, partner drills and self-defence etc., but setting up theoretical syllabus to teach the students about the history and philosophy behind the martial arts.

While training in Kobudo (Okinawan Weapons) Sensei Fred Bateman got the chance to study Karate and Kobudo in Okinawa, Japan. This occurred in 1998 and from this he was able to expand the knowledge of the Anshin Karate and the Kobudo arts here in England. But more importantly it gave him the stepping-stone to study under his new Sensei Phil Snewin (5th Dan) in Kamishin Ryu. This provided Sensei Bateman of more of an understanding of a Budo Art rather than a “Sporting Art”.

His combined knowledge from his time in Japan and with these eminent Sensei enabled him to evolve the Anshin Ryu Karate to what it has become today. All three of the Sensei are still actively involved with learning from world class instructors, such as with their current Matayoshi Kobudo Sensei Franco Sanguinetti, 8th Dan. As they state the art of Karate is a “Life’s Journey”.